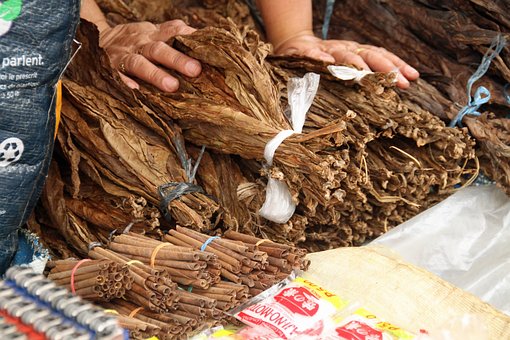 Tobacco used to make cigarettes is a tall, leafy annual plant, originally grown in South and Central America, but now cultivated throughout the world, including southern Ontario. There are many species of tobacco; Nicotiana tabacum (or common tobacco) is used to produce cigarettes.

Nicotine, a powerful central nervous system stimulant found naturally in the tobacco leaf, is classified as a drug. Nicotine is one of the primary ingredients in tobacco. It’s commonly used as an insecticide.

Tobacco leaves can be burned and inhaled (in the form of cigarettes, cigars, pipes, smoke, etc.) or absorbed through the mouth (in the form of spit tobacco, chew, or snuff). The membranes in the nose, mouth, and lungs act as nicotine delivery systems – transmitting nicotine into the bloodstream and to the brain.

Smokers usually feel dizzy and sick when they first inhale the nicotine in tobacco, but gradually build up tolerance to its effects. Other symptoms new smokers experience includes coughing, a dry, irritated throat as well as nausea, weakness, abdominal cramps, headache, coughing or gagging.

Nicotine is highly addictive. The addictive effect of nicotine is the main reason why tobacco is widely used. Many smokers continue to smoke in order to avoid the pain of withdrawal symptoms. Smokers also adjust their behavior (inhaling more deeply, by way of example) to maintain a certain level of nicotine in the body.

Smokers who usually smoke at least 15 cigarettes each day or smoke their first Cigarette of the day within 30 minutes of waking are likely to experience nicotine withdrawal symptoms. They will likely find quitting uncomfortable.

Symptoms peak from 24 to 48 hours after stopping and may last from three days up to four weeks, even though the craving for a Cigarette can last for weeks.

Most smokers make an average of three or four quit attempts before getting long-term non-smokers. Relapse is the rule rather than the exception and must be seen as part of this process of stopping.